Anthem of the Seas and New York City

I was lucky enough to receive an invitation to the inaugural sailing of the Anthem of the Seas. It is two days of fun in the open water - a "cruise to nowhere" out of a New Jersey harbor. We were going all that way, so of course we added two nights in New York City after the cruise. We'd never been there before, and what an opportunity!

My husband, Michael, and I took a redeye flight on November 3rd to New York to board the Anthem of the Seas. It is the newest ship from Royal Caribbean. Our flight left out of San Jose, and that is a bit of a saving grace, because let me tell you - red eye flights are not my favorite.

Serious travel tip for cruisers - it may sound great to take a red eye so you can fly in and arrive the day of your cruise. No hotel cost, no worries about numerous taxi rides, less time missed at work. Let me tell you - the extra cost is so worth it! I cannot sleep well on planes, trains, or automobiles, and I felt so worn out when we landed in JFK. My husband can sometimes sleep on planes, but he is an awesome guy, so he always volunteers the middle seat. Needless to say we were both zombies by the time we arrived.

We tried to perk up and put our game faces on, but were already dreaming of an afternoon nap while resting on the JFK airport hard plastic seats. We arrived at 7AM, and our bus did not leave for the pier until Noon.

Our bus arrived and saved us at 1130AM, and the excitement of the city woke me up. Every time I'm in a new place I get lost in the images outside my first taxi cab (or bus) window. The houses are different, the stores have different names, the trees are extraordinary! We lucked out and saw some gorgeous fall colors. And then while crossing one bridge or another New York City loomed on the horizon, and it was more beautiful that I imagined. The weather was unseasonably warm, and the skies were bright blue, and the city stood out against the water.

After about 90 minutes we arrived, and the ship was crazy large. It made our bus look like an ant. The Anthem has a huge observation pod called the North Star, and it lifts up a group of people out over the ship and over the water for amazing views. The first thing we saw while rounding the last corner of our ride was the North Star, and it started to feel real. Boarding the ship was the easiest procedure imaginable, especially for a large-ish ship, and for an inaugural sailing. We made it on board in no time, and immediately were greeted with champagne. The bars and restaurants were open, and we chose a comfortable spot, ordered a bourbon based Dark and Stormy, and relaxed.

The ship is pretty incredible. They have four main restaurants, a buffet, pizza, sandwiches, and room service that everyone can enjoy as part of their cruise cost. After that things start to get interesting with some tasty extra cost food choices including a Jamie Oliver Italian joint, a completely delicious legit gastro pub, a modern food Alice-in-Wonderland type place called, appropriately, Wonderland, and so much more. Seriously, this ship will not disappoint the food lover. I would advise putting some money in your onboard account in advance to pay for some of these extras.

The ship is outfitted with great technology. There is an app you can tap into that tells you what you are doing that day, what is going on around the ship, and what the restaurant wait times look like. Throughout the ship you can walk up to a huge touch screen to see the same information. Also, they give you wrist bands that store your on board account information so you can use those while ordering drinks and opening your stateroom door.

After two nights on the ship we made our way to New York City and the Plaza where we'd spend two more nights. The Plaza - such a lovely hotel. Honestly, just writing about it makes me feel calm and taken care of. It does such a nice job of creating an oasis in the city. The lobby smells like a spa, the room is large and opulent yet so comfortable, there is a large soaking tub, the service is amazing and quick... I cannot say enough. Spoil yourself and go there. It is so worth it. I've never slept better in a hotel.

We did not even spend that much time in the hotel, and it still made that much of an impression. There is so much to see and do in New York! We did our best.... 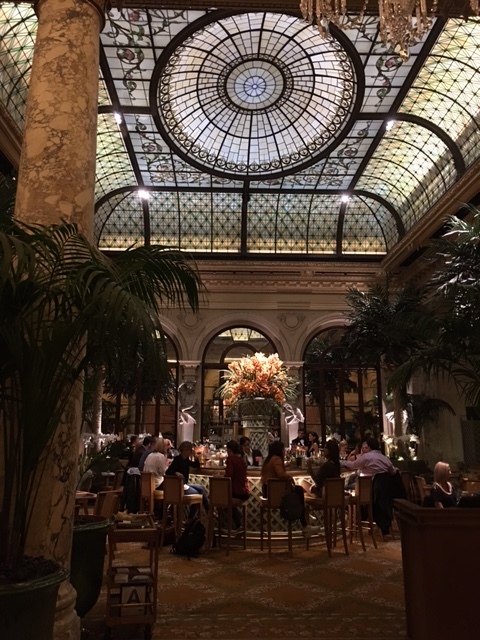 We started off with a Greyline 72 hour Freestyle Bus Pass - hop on/hop off bus around the city. We did not arrive until about 2PM, so we got a bit of a late start that first day. We took the tour of the East Side and West Side of the park, and then hopped off to wander through Central Park and make our way to the Natural History Museum. The tour guide said it would be no problem - just walk across the park! I've seen movies and read books about Central Park, but good lord! The park is incredible. There are meandering pathways, green hills, gorgeous tress. Everywhere you look people are hanging out, playing, snuggling... It surpassed all my imaginings.

We only had about 36 hours in the city, but we were determined to see the main sights. The Empire State Building, the 911 Memorial, the Natural History Museum, Central Park, and Times Square were the major sites we wanted to check off. I'd say we did a pretty good job. The 911 Memorial is beautiful and took my breath away. It is alarmingly large, and so peaceful.

The Hop on/Hop off bus was the best way to see the city in such a short amount of time. At one point we were near the famous Katz Deli so we hopped off for a pastrami sandwich - totally worth it. After that we wandered around Essex and stopped into a neighborhood craft beer store. Great choice!

Honestly, there was so much to see, and so much excitement in 2 days. I'm not doing any of it justice, to be sure, but I am at least giving a glimpse. New York is full of energy, good food, fun and interesting people, never ending skyline, and lovely architecture. I saw just enough to know that I want to go back soon. 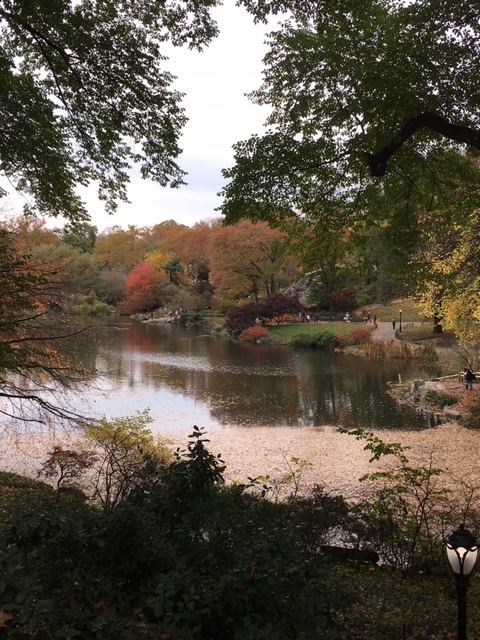